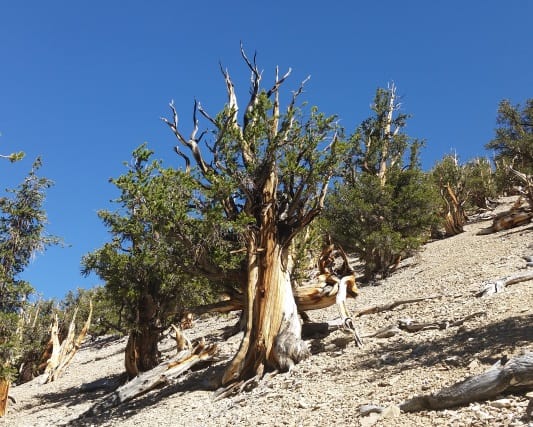 Though I no longer work a regular job, it still feels like a vacation when I break from the usual routine. And, for the past four weeks, we’ve enjoyed a major break from our regular routine. In late July, we left Santa Fe for an extended road trip to the West, Northwest, and Rockies. We saw family, friends, and national parks. Along the way, we visited a dozen potentially appealing retirement towns, and learned a few lessons….

Our first full day on the road, we passed through Flagstaff, Arizona (population: 68,667, elevation: 6,903 feet, average high: 65 F, average low: 36 F, annual precipitation: 18 inches, median home: $244,600), where we grabbed coffee and did a bit of shopping. Flagstaff’s setting high on the edge of the largest Ponderosa Pine forest in the continental U.S. has always appealed to us, though the snowy winters eliminate it from consideration for full-time residence. We’ll keep it as a vacation destination.

From Flagstaff, we made it to Las Vegas, Nevada (population: 603,488, elevation: 2,000 feet, average high: 80 F, average low: 59 F, annual precipitation: 4 inches, median home: $162,400). Though the Vegas club and entertainment scene is not for us, the city has other draws: mild winters, outdoor sports, low cost of living, and some nice neighborhoods.

Heading north, we stopped in Reno, Nevada (population: 233,294, elevation: 4,498 feet, average high: 68 F, average low: 40 F, annual precipitation: 7 inches, median home: $200,400) to see my colleague and friend Todd Tresidder. Todd is a serial entrepreneur who studied economics and went on to manage a profitable hedge fund. He “retired” at 35, and has been perfecting the art of living a rich life ever since. His web site — FinancialMentor — offers a wide range of free financial resources. Todd is one of the most original thinkers in personal finance, and has been a leading interpreter of the research into safe retirement withdrawal rates. With his diverse and offbeat range of interests, he’s also a lot of fun to be around. Here is his prescription for staying young, from a nutty guy not so different from Todd himself.

Moving north again, we passed through two Oregon towns that are appearing on retiree radars. Both offer a high quality of life in a small-town setting, but are quite different in a number of other ways. Ashland, Oregon (population: 20,713, elevation: 1,951 feet, average high: 60 F, average low: 31 F, annual precipitation: 23 inches, median home: $306,756) is smaller, greener, and artsier. As home of the long-running Oregon Shakespeare Festival, it is a significant tourist destination. The beautiful Lithia Park runs through downtown and links to extensive biking and hiking trail systems in the mountains above town, culminating in the Mt. Ashland ski area. The Pacific Crest Trail runs just south of town.

In the dry central section of Oregon, lies Bend (population: 81,236, elevation: 3,629 feet, average high: 61 F, average low: 32 F, annual precipitation: 12 inches, median home: $250,300). It is larger than Ashland, and slated to become more so, with the addition of a 4-year campus for Oregon State University. Bend offers a downtown of lovely, modest homes, vibrant businesses, and a lush riverside park. It’s also surrounded by extensive trail systems traversing terrain from arid lava beds to the snow-capped summits of the Cascades.

From Oregon, we headed to the coast of Washington state. I’ve never been interested in living on beaches or islands. But, I can appreciate the gorgeous coastline of northern Washington. For a day trip, we took bikes and caught the ferry to Lopez Island, for a pastoral ride past cultivated fields, seaside hamlets, and rugged coast. We ate excellent food in the village, then rode our bikes back to the ferry landing for the trip back to the mainland.

A bit further up the coast lies Bellingham, Washington (population: 82,631, elevation: 100 feet, average high: 60 F, average low: 44 F, annual precipitation: 35 inches, median home: $303,900), where we enjoyed a meal in the picturesque Fairhaven district, then took time for a short mountain bike ride on one of the local trail systems. The area offers an appealing mix of ocean and mountain scenery. From there we turned south and east, pointed toward home, still a long ways off. Immediately ahead lay the North Cascades. We made our way through these spectacular mountains with their glacier-derived, emerald-colored lakes. We also enjoyed the hospitality, coffee, and baked goods in a string of small and picturesque mountain towns — Concrete, Winthrop, and Twisp.

From Driggs we passed through Wyoming and made our way down to central Colorado, where we stayed in a couple more mountain towns with beautiful settings and retirement potential. Buena Vista, Colorado (population: 2,736, elevation: 7,955 feet, average high: 59 F, average low: 27 F, annual precipitation: 9 inches, median home: $203,946) was originally an important railroad stop serving mining and agricultural interests in the Arkansas River valley. Now tourism and outdoor recreation are major draws. The town features a quaint main street with appealing businesses, tree-rich neighborhoods, lush parks, and stunning views of the Collegiate Peaks to the west. The Colorado and Continental Divide trails pass nearby.

Further down the Arkansas River, at the low point of the valley, lies Salida (population: 5,409, elevation: 7,080 feet, average high: 61 F, average low: 29 F, annual precipitation: 9 inches, median home: $240,398), the county seat. Originally a railroad and ranching town, it has changed with the times and now counts tourism as a major draw, adding skiing and whitewater to other natural attractions. Salida also features a historic and revitalized downtown shopping district several blocks long, surrounded by lovely and diverse neighborhoods. The outskirts offer most of the required modern shopping conveniences. And Colorado Springs is about 2 hours away.

So we enjoyed a memorable vacation, reconnected with friends and family, and took in some of the finest natural scenery on the continent. But it wasn’t all fun and games. We saw firsthand in our travels many of the challenges facing our world: The major national parks were overflowing with crowds. Even in the backcountry, we were very rarely out of sight of other human beings. In Yosemite 30 years ago, I hiked to Cathedral Lake and saw a few parties. Now there are 100 cars at the trailhead on a given summer day. Drought and fires plague the American west. From Oregon to New Mexico, we were in smoke most of the way. The Cascades were dusty and dry. Glacier National Park was choked with smoke and 96 degrees in the shade. In nearly every city we entered, even idyllic mountain towns, the homeless were standing at intersections with cardboard signs. And, one of our credit cards was compromised, yet again — a regular occurrence of late. There is crowding, devastation, poverty, and greed in the land.

Yet there is hope too. It came to me on one of our first stops, high in the White Mountains of eastern California. There grow the oldest living things on earth — the ancient bristlecone pines — fantastically gnarled shapes silhouetted against deep blue skies, set on beds of white limestone. Some trees are 5,000 years old, almost the entire length of recorded human history. When I saw pictures of these as a boy, something about the ancient story captured my imagination. I’ve wanted to visit them ever since. I knew there was some lesson they could teach.

It was a lesson I couldn’t fully appreciate until I hiked through the bristlecones this summer, in middle age. The lesson was the answer to a question that had hovered in my mind for decades. What was it that these trees had to say? The answer was obvious within minutes of entering the ancient forest. The bristlecone pines have achieved fantastically long life spans in one of the harshest growing environments on earth. How do they live so long? The brief growing season generates an incredibly tough, resinous wood that is virtually impervious to decay. And the limestone rubble that passes for soil defeats all competition. The lesson, the answer to my question, was plain: A long and productive life is achieved not in spite of adversity, but because of it.

CHECK OUT MY INTERVIEW: Shortly before leaving on our summer road trip I talked with personal finance journalist Farnoosh Torabi, kicking off her “Millionaire Next Door” week. Farnoosh has a special place in the history of this blog, because it was her interview with us in 2012 for Yahoo News that launched Can I Retire Yet? onto the national stage. Farnoosh is a highly knowledgeable and gracious observer of the personal finance scene, and it was great to get together again for another discussion. Check out the podcast to hear our conversation and get my take on a number of topics, including the specific way that recurring costs eat away at your retirement savings, and what I did when I experienced a major market crash on the very eve of my hoped-for early retirement….