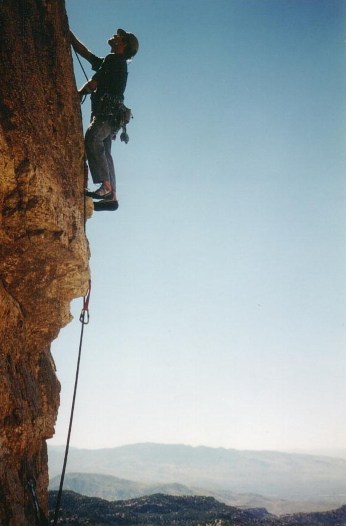 A recent review of my new book grabbed my attention: “Consistent with his background as an adventurer, Kirkpatrick never oversimplifies things by labeling them “safe” or “risky.” He emphasizes that every decision you make has risks, which must be managed or accepted to achieve the outcome you desire.”

It’s true. I don’t look at life through absolute rose-colored, or dark-gray, glasses.

On deeper analysis, everything in our world has multiple causes and conditions. Given the complexity and richness around us, it is almost always an oversimplification to say that “X caused Y.” So, at best, most of our decisions are an educated guess, a calculated risk.

I’ve done hundreds of technical rock climbs. The vast majority were as safe as a walk around our city park — though definitely more exciting. A few of those climbs were potentially lethal. The risk was relatively low, but it was very real. I decided long ago it was worth it to me. And, in exchange, I’ve received a lifetime of indelible memories from being in high and wild places.

I always find it bizarre when, after some public safety scare, government officials declare that things are “safe” again. That kind of absolute safety doesn’t exist. On the other hand, the prevalence of negative news in today’s world often leads us to overestimate danger. According to news reports you’re more likely to be crushed by furniture than die in a terrorist attack. Meanwhile the equivalent of a plane load of Americans die in traffic accidents every day. The reality of your personal safety lies somewhere in between the extremes.

In the realm of personal finance we face similar tradeoffs between risk and reward in complex, real-world scenarios: How should you allocate your investments? Should you retire sooner, or later? Is it best to pay taxes now or in the future?

There are rarely absolute answers to these questions. And, since I’m not making a living by selling financial services, I don’t need to make promises about the highest-performing investments, the maximum possible retirement income, the most effective tax strategy. Such promises are impossible to keep in the real world.

We all eventually learn that the only route to reward, whether personal or financial, is accepting a certain level of risk. In life, that’s how you grow. In investing, it’s why you get paid.

Want a better life? You have to invest time, energy, and money into improving yourself. And still, you run the risk that things won’t turn out as planned. Some of that effort could be “wasted.” Though the odds are in your favor. And, as the years pass, you realize it was all part of the process anyway.

Want higher investment returns than “safe” investments like cash and bonds deliver? You have to invest in educating yourself, then you have to accept the volatility of investing in stocks, then you have to wait. For years, possibly for decades. Though the odds are in your favor. And, as the years pass, you realize this was your best bet anyway, regardless of the specific return you received.

Taking risks often appears to be easier when you are younger. A young body bounces back from injury far quicker. A young investor with a steady job can afford to wait decades to realize expected stock returns.

And taking risks appears to get harder as you age and become more fragile and less flexible. I’d rather do a gentle hike these days than ride a rocky downhill on my mountain bike. The rewards of the latter route are no longer greater than the risks for me. I also keep my portfolio conservatively positioned with a bit less than 50% stocks, because we have enough already and don’t want the volatility that would accompany a shot at more growth.

Yet aging is not always about shying away from risk. Those who are financially comfortable might choose some speculative investments with money they could afford to lose. And, on a personal level, retirees have a unique opportunity to experiment with new interests, new activities, new lifestyles. If your income is assured, what do you have to lose?

Accepting risk is not the same as being reckless. There are many proven strategies for taking on risk while tilting the odds in your favor. Here are just a few:

Test first with a sum that won’t destroy you if lost: If you’re a beginning investor, own a few $K of a broad stock index fund for a few years before investing further. If you’re a retiree, buy a $25K immediate annuity before buying a $250K one.

Watch early warning indicators for problems. For investors, see my post on stock market indicators. For retirees, see my new book for a simple retirement fuel gauge alerting you to problems while you still have time to act.

Follow the crowd when there is safety in numbers. There is massive statistical and academic evidence that passive index investing — owning the whole market while rarely buying or selling, is the surest path to success for most investors.

When crowds are a negative, go out on your own. You gain a lot of control over your comfort, safety, and happiness in today’s world by choosing your geographical location carefully. I prefer living in medium-sized towns for the best blend of services, without big-city problems.

When you can’t self-insure, buy insurance. Most of us should insure our income while we have dependents. And most of us will need to make some use of annuities later in life, to insure against running out of income before we run out of time.

Always diversify. Put your eggs in different baskets. Own different, uncorrelated asset classes (stocks, bonds, international, cash, commodities, real estate). And keep them at more than one investment company. Some redundancy is good when it comes to your money. If one of your holdings should underperform for a while, another one will likely step in to carry the load. If one custodian has temporary computer problems, you can deal with another.

Have a backup plan. Know ahead of time what you’ll do if important objectives don’t materialize as planned. Liquid emergency savings are critical to your financial safety. Without liquidity, unexpected events could leave you without operating cash, forcing you into selling investments at a loss, foreclosing on a home, or declaring bankruptcy.

The all-too-human craving for certainty is one of your biggest financial enemies.

If you think you must have certainty to be financially successful, you are easy prey for a host of financial products that are only too ready to cash in on your fears.

The most effective path is to accept the unavoidable uncertainty in most financial decisions, while understanding the safety that diversification can provide. Diversifying will protect you as much as is possible in the vast majority of financial scenarios. And in those rare cases where even diversification breaks down, then flexibility and acceptance are your ultimate and best refuge.

I launched my first book, Retiring Sooner in June of 2013. It covers the techniques that I, and many others, have used to achieve early financial freedom. That includes budgeting, saving, simple investing, boosting income, and setting retirement goals. The book was well received, and has sold modestly but steadily over the years.

Early this June, three years later, I launched my second book, Can I Retire Yet? It draws from research and writing on this blog over the intervening years to explore all aspects of the retirement question: expenses, income, withdrawal rates, investing, annuities, health care, retirement modeling, separating from a career, part-time retirement jobs, and backup plans. Mixed throughout is my actual experience, living as an early retiree.

Retiring Sooner is for those in early to mid-career, beginning to save for and think about financial independence. Can I Retire Yet? is targeted at near-retirees with substantial assets, who are beginning to contemplate the retirement decision. It is generally a more technical and detailed book than my first.

“Can I retire yet?” That’s always been the central question of this blog. And from the early days, I’ve wanted to put out a useful book on the topic. But I was unprepared for the reception that this second book has gotten. In the first two months, it’s already overtaken my first book in sales. Reviews on Amazon are averaging 4.8 out of 5 stars. And a number of people have written that this is currently the most comprehensive book on the retirement question.

If you have bought my book, thank you for supporting this blog. And special thanks to those who have left reviews on Amazon. Those are much appreciated! I don’t have a big ad budget or an army of virtual assistants to publicize my efforts. So I rely mostly on traffic to this blog and your word of mouth. Thanks for your help!